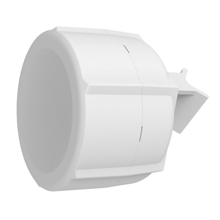 The SXT LTE kit is a device for remote locations that are within cellular network coverage. However, due to its professional LTE chip design and high-gain antenna, it can provide connectivity for your building even where cell phones can't.

In comparison with MikroTik's first generation model RBSXTLTE3-7, the SXT LTE kit is powered by faster CPU and supports not only LTE with more speeds, but also 2G and 3G, as well as a much wider band range.

The unit is equipped with two Ethernet ports (the second port has PoE-out functionality), so you can use it to power another device. The unit is shipped with a 24 V power supply, but can support full range 18 - 57 V and is 802.3af/at compliant.

The device has a built-in high-quality 2G/3G/4G/LTE Category 4 modem for speeds of up to 150 Mbit/s downlink and 50 Mbit/s uplink, as well as two Micro SIM slots for backup link.