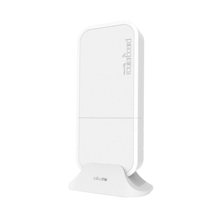 The wAP LTE is a small weatherproof wireless access point with a built in cellular modem that supports 2G, 3G and 4G (LTE) connectivity. Connect to the wAPs built-in 802.11b/g/n wireless and access the LTE network from your phone or any other wireless device. The wAP LTE also has one 10/100 Ethernet LAN port for your wired devices.

The waterproof device can be mounted outside your house, in the vehicle, on your porch or anywhere else where you need wireless access from your phone or computer. It also includes a desktop stand so you can put it inside the building near a window.

LTE cards are connected to two internal antennas with u.FL connectors, so if you want, you can unplug the connectors and add your own external LTE antenna for larger coverage. The unit has the several powering options - 9-30 V PoE-in by Ethernet port, DC jack and automotive connector - very handy in mobile devices like car, bus or train.