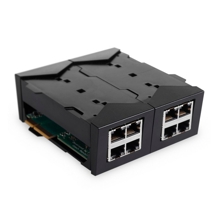 The MOX E module is an ideal choice if you need more Ethernet ports to connect devices to your network. It has twice the width of the other modules and contains an eight-port manageable switch for Gigabit Ethernet.

This module can be used only as an extension in a set. You will need at least MOX Start. If youre combining it with other modules, make sure they are compatible.