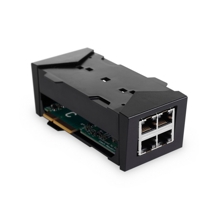 There can be only one MOX C module in the configuration; the SGMII bus is terminated there. For this reason, the MOX C cannot be combined with MOX D. If you need to expand your configuration further, choose MOX E.

This module can be used only as an extension in a set. You will need at least MOX Start. MOX C is included in the MOX Classic set. If youre combining it with other modules, make sure they are compatible.