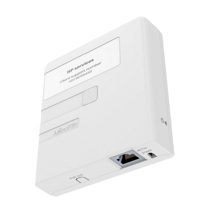 The GPEN11 is a power injector that can be mounted on a wall, and will power your uplink devices with PoE power. The GPEN11 is part of the GPEN (Gigabit Passive Ethernet Network) concept, which aims to replace GPON installations with lower cost and more easy to deploy Ethernet alternatives. It also has a designated space for an ISP sticker on the front (sticker size: 6,6 x 2,54 cm).

GPEN11 can be mounted inside customer premises, next to the WiFi router which provides the connectivity to the users. The GPEN11 itself will then power the ISP router, whether an outdoor wireless unit mounted on a roof, or the network switch.

The GPEN unit can be securely attached to a wall or communications cabinet. The Ethernet cable can be routed either directly through its bottom cable opening, or into the wall, as preferred.