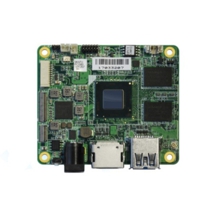 UP Core is a miniature board with the high performance and low power consumption features of the latest tablet technology: the Intel(R) Atom(TM) x5 Z8350 processors (code name Cherry Trail) 64 bits up to 1.92 GHz. The internal GPU is the new Intel Gen 8 HD 400 with 12 Execution Units up to 500 MHz to deliver extremely high 3D graphic performance.

With 100-pin docking connector, UP Core provides the freedom to makers to build up

When it comes to security, UP Core has Intel security features needed for professional IoT applications such Intel AES New Instructions and Intel Identity Protection Technology.

Its UP to you to choose which operation system is best for your application. The CPU is supported by Android 6. Marshmallow, Microsoft Windows 10 and Linux (through the UP Community).

UP Core has a standard industrial PC operating temperature range of 32°F - 140°F/0°C - 60°C, which makes it flexible for many applications.

AAEON
UPMPABSCHASSISV1 - ABS Plastic Case for UP Board
11,89 EUR