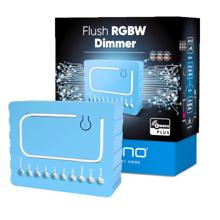 The Qubino RGBW Dimmer module controls RGB/RGBW LED stripes and bulbs and lets them shine in various colors. Therewith, you present your home in the right light. Beside 16 million selectable colors, you can use 5 already pre-defined scene effects (Ocean, Lightning, Rainbow, Snow and Sun).

The device is placed in a wall box right behind a RGB/GRBW switch. The switch is no longer directly connected to the light but acts as an input device for the Qubino module that is controlling the light. The Qubino RGBW Dimmer module occupies a smaller volume than comparable modules of any other brand and will fit easily in any flush mounting box.

Thanks to Z-Wave, you can control your light conveniently via smartphone and tablet-pc as well as automatically through intelligent sensors and time schedules. Therewith, you create not only good mood atmosphere, but also use colored light within safety scenes for optical alarms or presence simulation.